You’ve got to love a trier! Undeterred by Keith’s masterful account of  volcanoes on Film and TV; Tom and BJ’s insightful views on volcanoes in literature AND in the name of UEA50 mash-ups here is my account of Volcanoes in Kid’s Movies.

When you have kids, you get to watch a lot of really bad movies (and some good ones). Sometimes the load is lightened along the way by a little unexpected volcano action. In fact my kids have even been known to entice me into watching a particularly bad version of  ‘Tinker Tweetie Cute Dog Saves the Day’ by pretending there is a volcano in it.  The sad bit is that it works (c.f. No. 1 on this list)

Like Keith’s ‘grown-up’ movies the volcano is usually a plot device. They also have a strong association with bonkers scientists (gotter love a cliche) but never geologists. Volcanoes in these movies are almost always teetering on the brink of eruption, just waiting to be tickled into action by a mad scientist or flagrantly evil person. Typically, no good comes of these actions (presumably due to the lack of geological advice).

Plot: The unfeasibly annoying chipmunks find themselves washed up on a Caribbean island arc volcano that turns out to be an active volcano. There is some rescuing.

Volcano Reality Rating:  70. I hate to say it but this is the most realistic eruption I have for you (see design image below).  Reasonable enough Strombolian activity, quite unusual for the inferred island arc environment though. Think paroxysmal eruption of Stromboli in the Caribbean.

Volcano as Plot Device: Central! Unrest and build up to the activity forms backdrop to most of the movie. Eruption too short-lived though.

Mad Scientist Index: 11. There is a very mad girl, but I refuse to believe she is really a scientist.

Plot: Evil people try to use mind control to take hold of Tracy Island and thus rule the world. They are thwarted.

Volcano Reality Rating: 46; although it doesn’t erupt which is kind of cheating.

Volcano as Plot Device: OK! Its Tracy Island but is it an ocean island or island arc volcano !?! It is ‘in the Pacific’.

The baddie has a female scientist accomplice and there is of course Brains who is not mad but just v. v. clever. His son is called Fermat, by the way.

Plot: Wreck-it Ralph wants to be a good guy so goes to play in SugarRush  and ends up rescuing a little car driving girl from an evil overlord (KingCandy). Weird, but actually quite funny.

Volcano Reality Rating: 0. BUT the volcano is a coke and mentos one in the middle of Candyland. How cool is that?  Plus several million for clever thinking.

Volcano as Plot Device: Marginal; but an ‘unexpected’ release of mentos into the coke crater lake is worth the wait.

Mad Scientist Index: 3 Low on scientists, just an evil meglomaniac (who is defeated for the peace of mind of those inclined to be unsettled by mild peril).

Plot: Nim lives on an isolated island with her dad who has a tenuous grasp on basic parenting skills. Jodie Foster helps her out.

Volcano Reality Rating: 30 our only non-cartoon eruption. Some ballistics etc clear some nasty tourists from Nim’s beach; but it does seem to be set off by a fire and look a bit like a giant fireball when it goes off. Whoops! Another subduction-related volcano – this time in ‘the Pacific’. 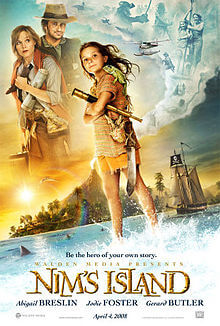 Volcano as Plot Device: Not good enough, Jodie Foster. Rather disappointingly the volcano is rapidly outgunned by an incoming tropical storm. What is that all about… booooo……oooring.

Mad Scientist Index: 99 Nim’s mum (an oceanographer who frankly should have known better) has been swallowed by a whale and Nim’s dad is a marine biologist with a Scottish alter ego that looks much more convincingly like the geologist they all clearly need on hand. In his marine biologist incarnation he likes weird glow-y stuff which he values more highly than his daughter’s personal safety.

Volcano Reality Rating: 12….. errr there are some good ballistics when the baddies get dropped in.

Volcano as plot device: Weak. This is just a very good movie that happens to have a volcano in it (for dropping baddies into).

Mad Scientist Index: 63. High on the ‘mad inventor’ end of the scientist scale.

AND FINALLY : While you are reading this Hollywood Movie Moguls; Fireworkmaker’s Daughter, Kidnap in the Caribbean and The Secrets of Vesuvius would all make fab movies. Do it! No more chipmunks!