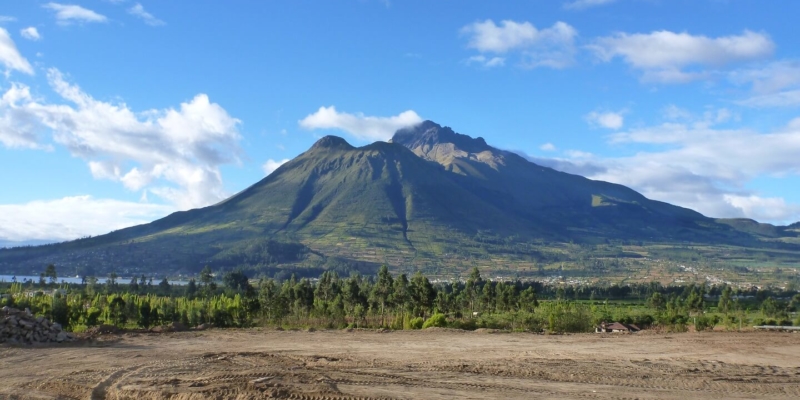 Just prior to STREVA’s first birthday, a small group of STREVAns, including project partners and a handful of fantastic collaborators, headed off to Ecuador for our second forensic workshop. The theme of this meeting was “El Volcan es mi Vecino” (“The Volcano is my Neighbour”) and was designed to explore experiences of different community groups who are dealing with a long-lived volcanic crisis. The ultimate goal of this forensic workshop was to gather an evidence base to help us understand: a) the eruptive history, monitoring practices, hazard assessment and response at Tungurahua, b) to identify communication networks and local perception/interpretation of the volcanic hazard and risk, c) to investigate the decision making processes and emergency response of local authorities to volcanic crises, and, d) to explore the experiences of communities that live alongside the volcano in an effort to construct a narrative of changing vulnerability, resilience and adaptation to volcanic risk. 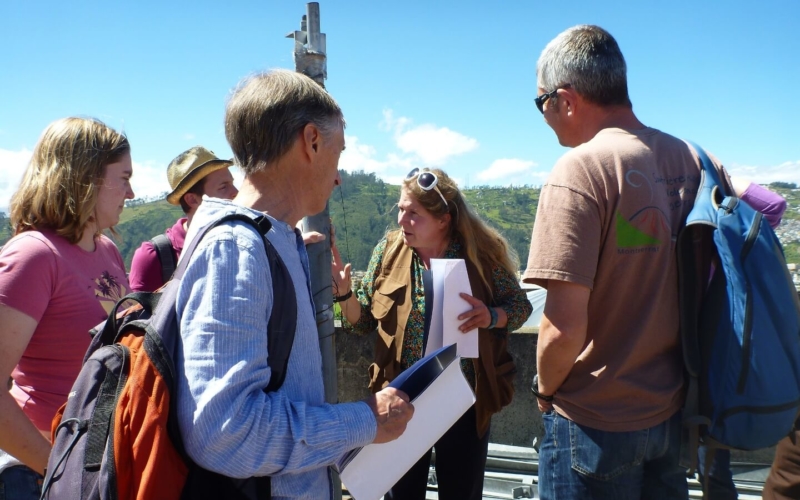 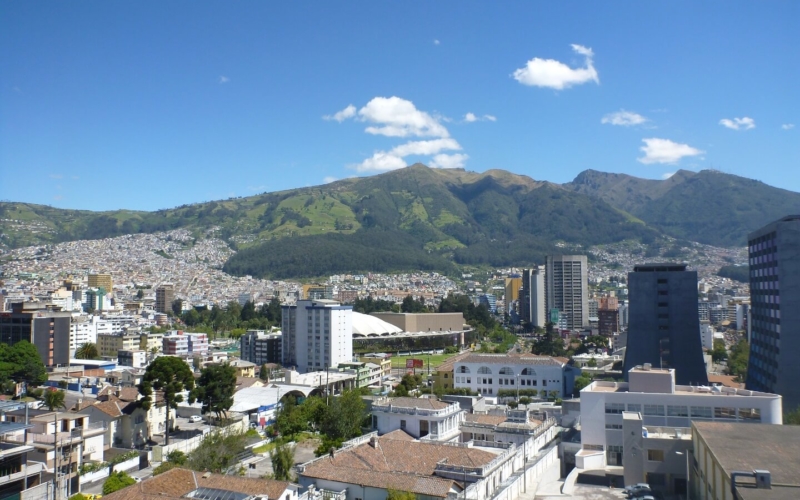 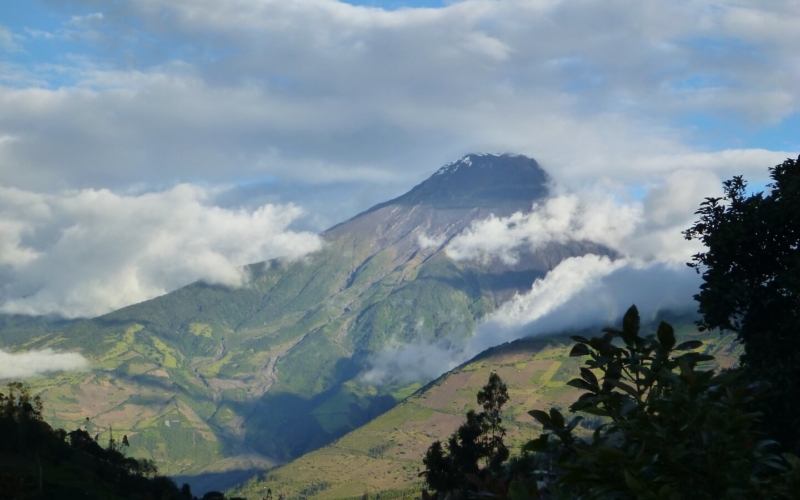 Our journey started off on the 13th June with a visit to the Instituto Geofíscio Escuela Politécnica Nacional (IG-EPN). We were treated to a tour of the Institute, particularly the volcano monitoring outfit, and a brief description of the eruptive history of Quito’s nearest volcanic neighbour, Pichincha.  The team were then whisked off to Baños (roughly four hours south of Quito), and enjoyed the spectacular views of some of Ecuador’s 84 volcanoes, along with a superb narration from Head of Volcanology at IG-EPN, Patty Mothes. Just before our arrival in Baños, we managed to get a rare view of Tungurahua volcano, which is so often shrouded in cloud. What a way to welcome us to our second forensic setting!

For the next few hectic days, we conducted field trips, community meetings, interviews with risk and emergency managers, mayors and the monitoring scientists. This was sometimes organised in our ‘specialist groups’ (i.e. social science/physical science), but occasionally as an interdisciplinary unit, where a variety of perspectives were brought to the discussions. Three absolute stand-out experiences were the exhibition of the childrens art, the journey to La Casa del Arbol (The House in the Tree) and the participatory mapping meeting with the vigias (volunteer volcano-watchers).

The Casa del Arbol is the property of Carlos Sanchez, a volunteer vigia of the volcano. From his ‘house in the tree’, Carlos has a strategic view from which to observe potential pyroclastic flows moving downslope towards Baños.  Via radio link to the Observatory, Carlos can also give early notification of lahar flows and provide a first alert of bad weather conditions that could generate lahars.  He also takes care of the IG instrumentation which is positioned next to his property. We are honoured to have met such a dedicated volcano enthusiast! 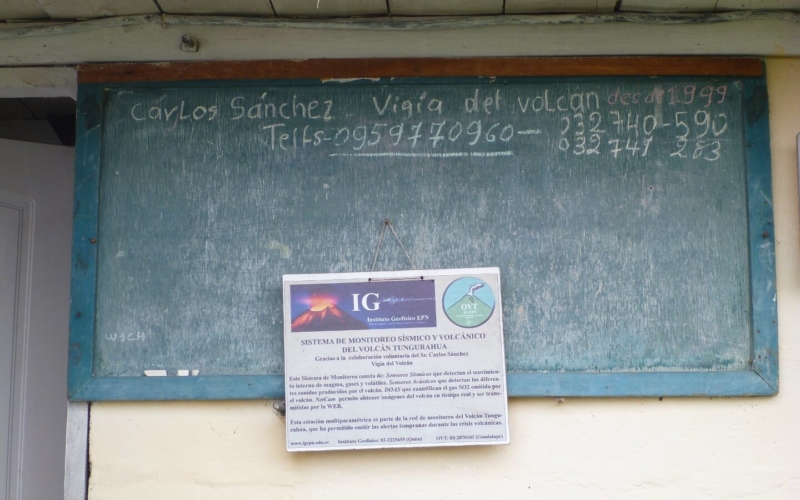 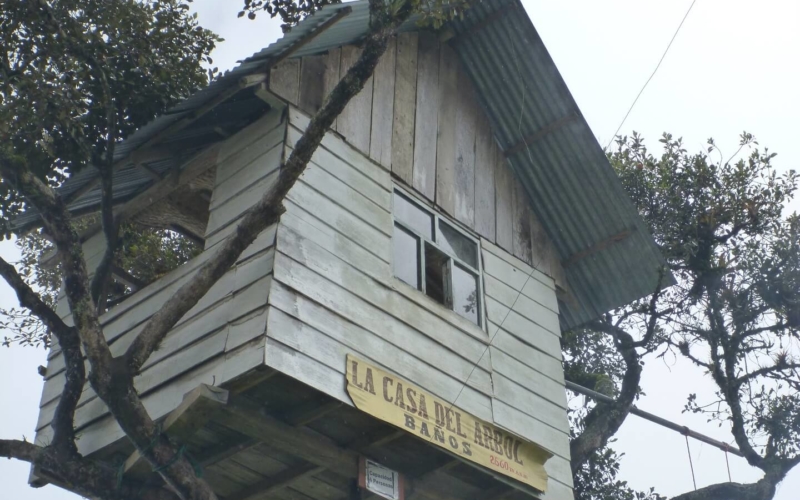 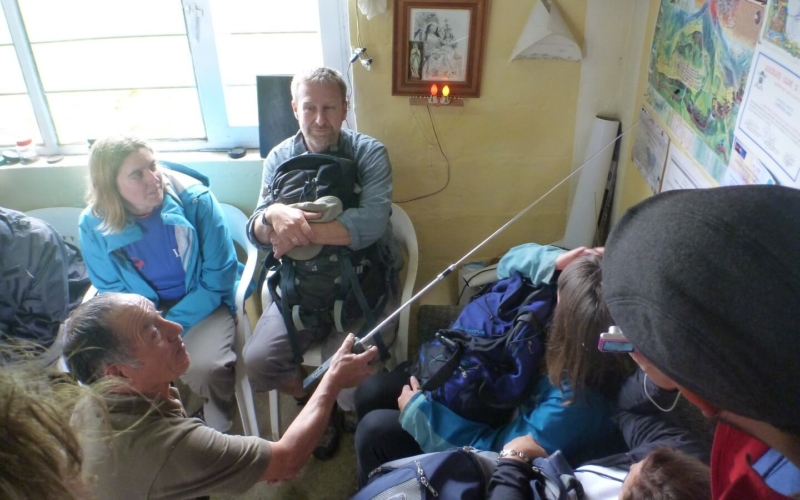 On Sunday 16th June, the STREVA team were joined by over 20 vigias from Tungurahua and Chimborazo province to participate in an eruption timeline and mapping exercise. The vigias were split into groups according to their location around the volcano and quickly got enthused recalling the events surrounding the volcanic activity from 1999 to the present day. Then the groups began two mapping exercises, demonstrating their understanding of the volcanic hazards, knowledge of evacuation routes and vulnerable community assets. While the STREVA project achieved much from the exercise in terms of gathering good data, the vigias also enjoyed the day with us. One of the vigias from the ‘west-Tungurahua’ group said, “It has been good to remember our story, but also how vulnerable we are. There are still a lot of things to be done.” Another vigia from the east-Tungurahua group thought it was a valuable exercise and said that it had been interesting to hear how there were two different realities – even though the communities are close together, it seemed that volcanic hazards affected them in different ways. 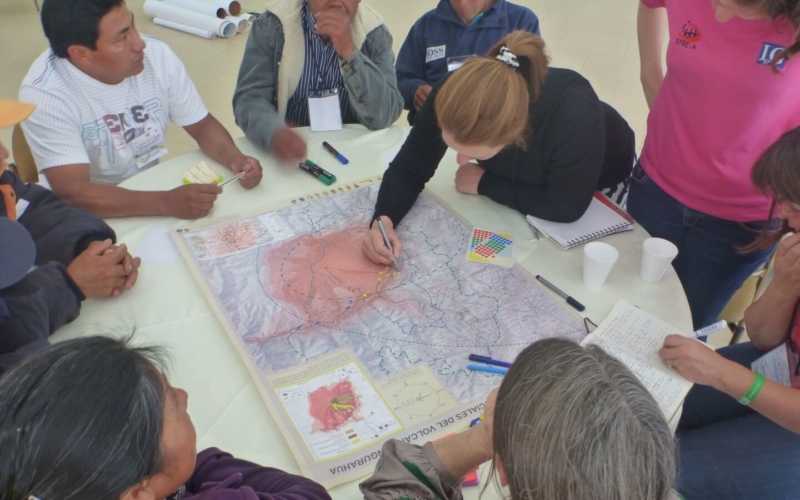 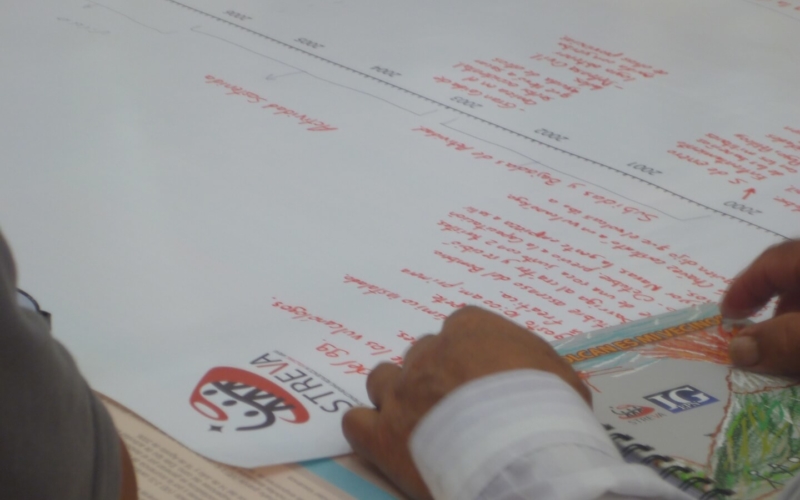 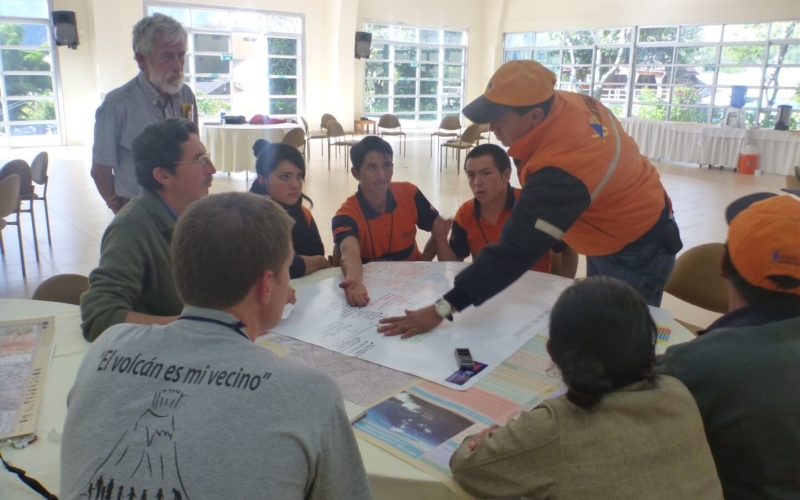 Meanwhile, the monitoring scientists were busy conducting a paired comparison exercise designed to rank and compare their monitoring tools (e.g. seismicity; GPS) firstly in terms of understanding the science behind volcanic activity at Tungurahua, but also which are better at alerting the scientists to increased activity. Watch this space to find out how highly Tungurahua’s vigias were ranked! And is GPS better than tiltmeters?

The following day, the STREVA team departed Baños and headed north, through the vast Cotopaxi lahar deposit, to the province of Cotacachi. We were impressed by the prominent Imbabura volcano, which lies immediately to the west to the large ‘villages’ of Cotacachi and Otavalo. Most spectacular of all, however, was the beautiful Lake Cuicocha and its two domes (Yerovi and Wolf) positioned in the centre. To finish the day, the team had a meeting with emergency managers and the mayor of Cotacachi to discuss STREVA’s aims in this area (Cuicocha volcano is our trial setting) and how we could work together over the next few years. 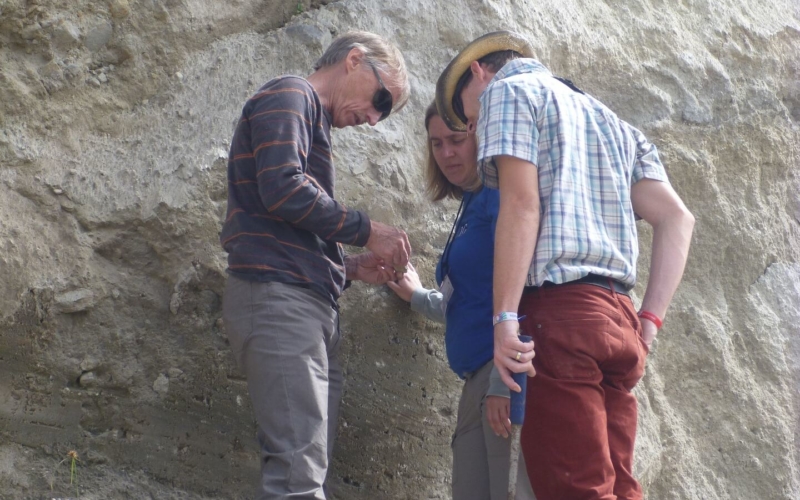 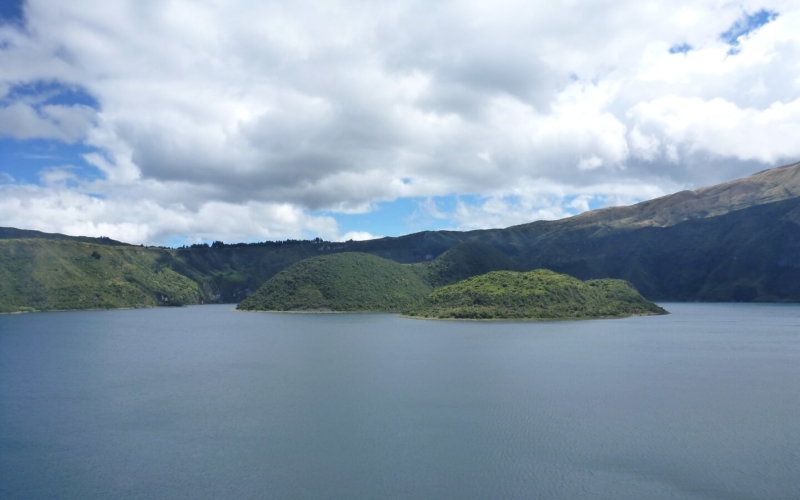 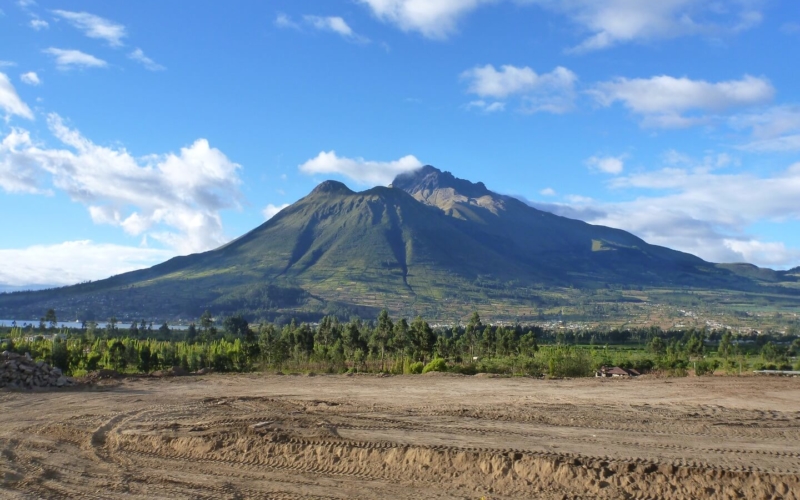 Our second workshop was a resounding success, to which we owe a huge thank you to Liliana Troncoso (IG-EPN), Patty Mothes (IG-EPN) and Emily Wilkinson (STREVA; ODI) for their sterling effort. Thanks also to Patricio, Andres, Zammy, Gorki and Wily (plus many others!) for their assistance throughout our visit to Ecuador. We look forward to seeing you again next year!

Over 70 attendees took part over 4 days. There was opportunity for discussion and for…