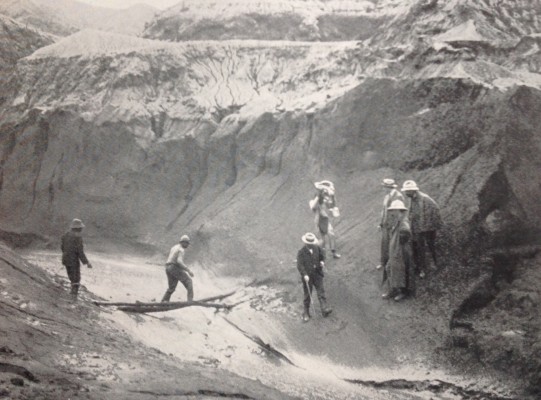 Today’s field photo is by Tempest Anderson, of the ‘Roseau Dry River flowing with Boiling Mud’, a picture taken in the aftermath of the May 1902 eruptions of the Soufrière of St Vincent.  The full published caption explains the origins of this boiling mud – a phenomenon we now call a lahar:

‘This is a small stream in the Wallibu Basin. When the water undermines the banks and the hot ashes fall into the river, the stream is often dammed up, and the giving way of the obstruction is associated with a great discharge of boiling mud. In one of our ascents of the Soufriere, we had crossed the Rozeau Dry River without difficulty in the morning when the weather was fine, but heavy rain had fallen before our return in the afternoon, and the river was full of boiling mud, coming in gushes, as shown in the picture. After some trouble our men cut down two trees which had been killed by the eruptions, and made a bridge by which we crossed. The banks show the characteristic erosion by the rain rills.’

Lahars are a very common feature at volcanoes, and they may often continue to be triggered by strong rainfall events for months or years after the eruptive activity has ceased.

Tempest Anderson was an opthalmologist by profession, and also an inveterate traveller and photographer. He accompanied  John Flett to the Caribbean to document the eruptions on St Vincent and Martinique, in 1902, and a selection of his photographs can be found on the website of the Yorkshire Museum. The Soufrière of St Vincent is the centrepiece of the London Volcano project, which runs from 9-13 June.