The birth of a (Norfolk) volcano

The birth of a (Norfolk) volcano

Well, aren’t we all very relieved at Team Norfolk Firework Volcano? Our volcano has been rained on, blown about by the wind, dangerous freshers with crazy ideas are on campus…. but look! It’s still up there! We wanted to build a firework volcano because of the reasons described here, and so we chose a volcano …. but then we had to start building it, which wasn’t so easy. Here’s how we did it:

We decided upon a site

One sunny summers day, everyone involved took a walk around campus to find the perfect spot for our volcano. 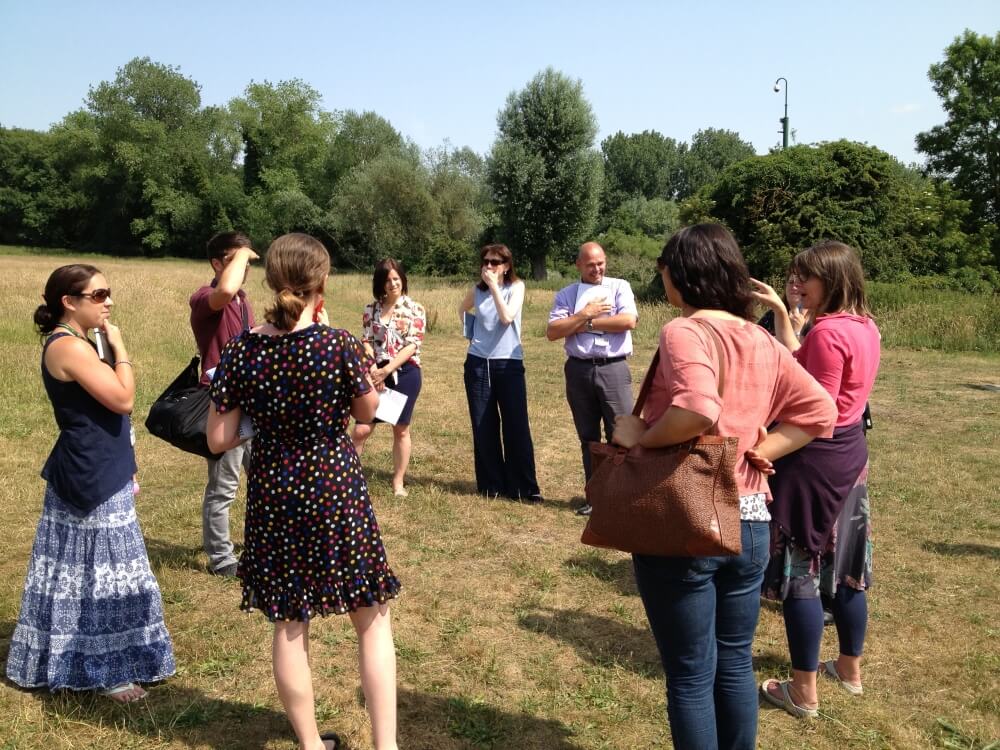 It had to be fairly flat, so that it would be easier to build on – but it had to be impressive. We chose the top of Waveney Mound (or The Prospect) because it was a big hill (which would add height), the setting around it made a natural amphitheater for people who would view the “eruption” and it had good vibes!

We fixed the size of the volcano

We wanted the volcano to be big, but erm, we had to build it. So we decided that the volcano should at least be “taller than the tallest dad” so that we could impress small children. We fixed the height at 2.6 m, with a vertical exaggeration of 2.5 which gave us a volcanic diameter of just under 7 m. This is us checking that it would fit! 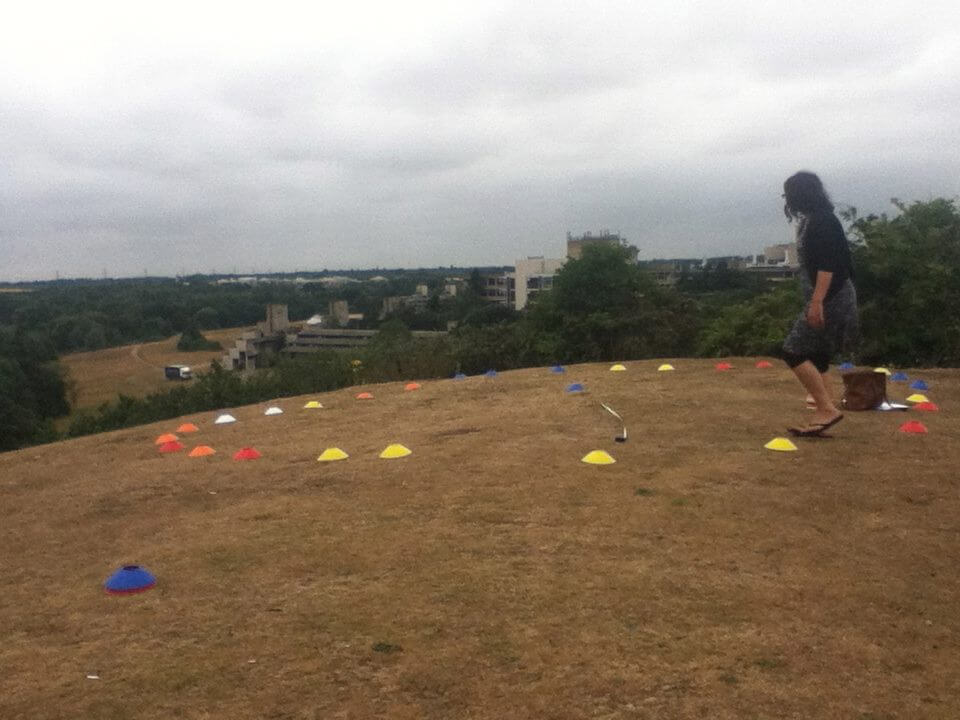 We got some real data

One of the first steps we took was to get a virtual model of the volcano that had real elevation data. This was relatively easy (UEA has many people working on this type of data) and then we extracted contours from this. 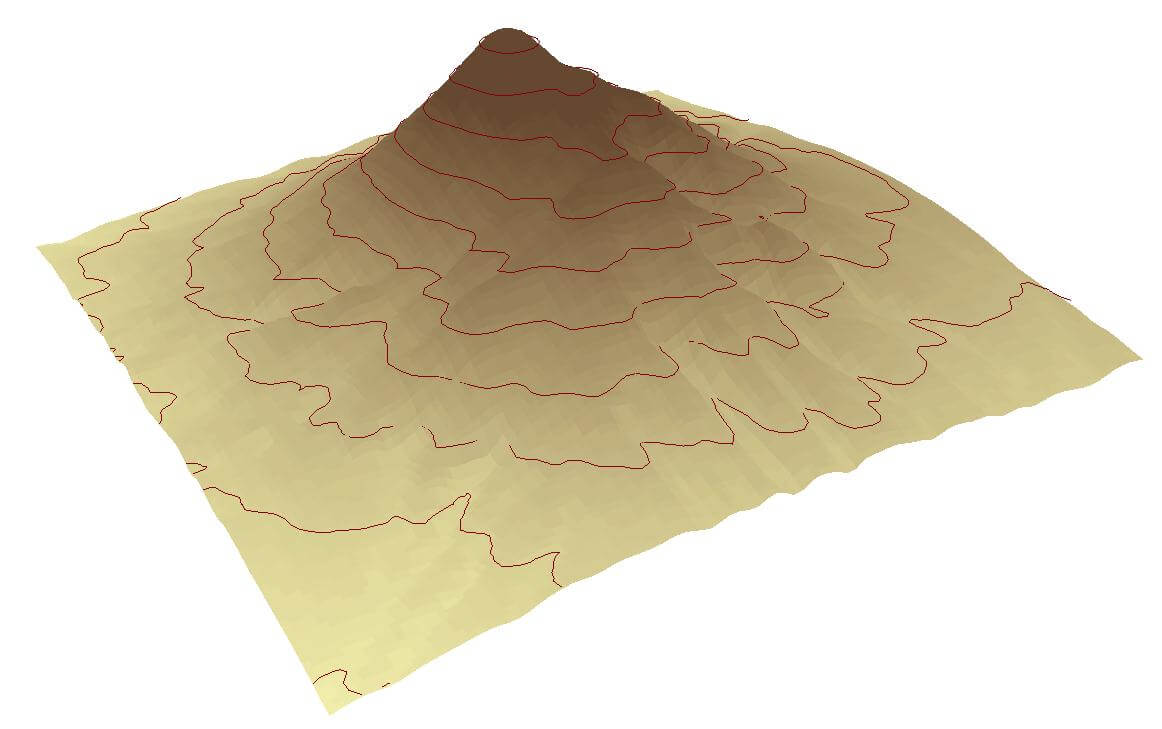 We made a template

At first we were going to scale up an A3 version of the contours to the full 6.8 m diameter of the volcano by hand. This led to a minor breakdown – just think of sheets upon sheets of paper, rulers that aren’t long enough, pencils that kept on breaking… so we went back to the drawing board. We managed to get the template printed on to 48 sheets of A0 paper for a reasonable amount, but then we had to stick those 48 A0 sheets of paper back together and then cut them out! This required 7 PhD students (no comment), lots of coffee and bribery with cookies – but we got it done, And here’s the video of us doing it:

At first we thought that we at Norfolk Firework Volcano could build the volcano ourselves. Give us a hammer, some nails and we’d get it done, right? Well, no. The scale of the volcano needed someone with building experience, otherwise it wouldn’t look right. Luckily for us, a friend of the team (Rob Dickson) came up with a plan and committed to building the volcano with the help of two other local builders: Lewis Jaggard and Adam Killingback.

We got all the bits we needed to build the volcano

Wow, that statement doesn’t even begin to describe what the build process was like. First we got Rob and Lewis to cut the plywood, it’s a shame that we didn’t get a photo of them making pirate swords out of the left over bits of plywood…. 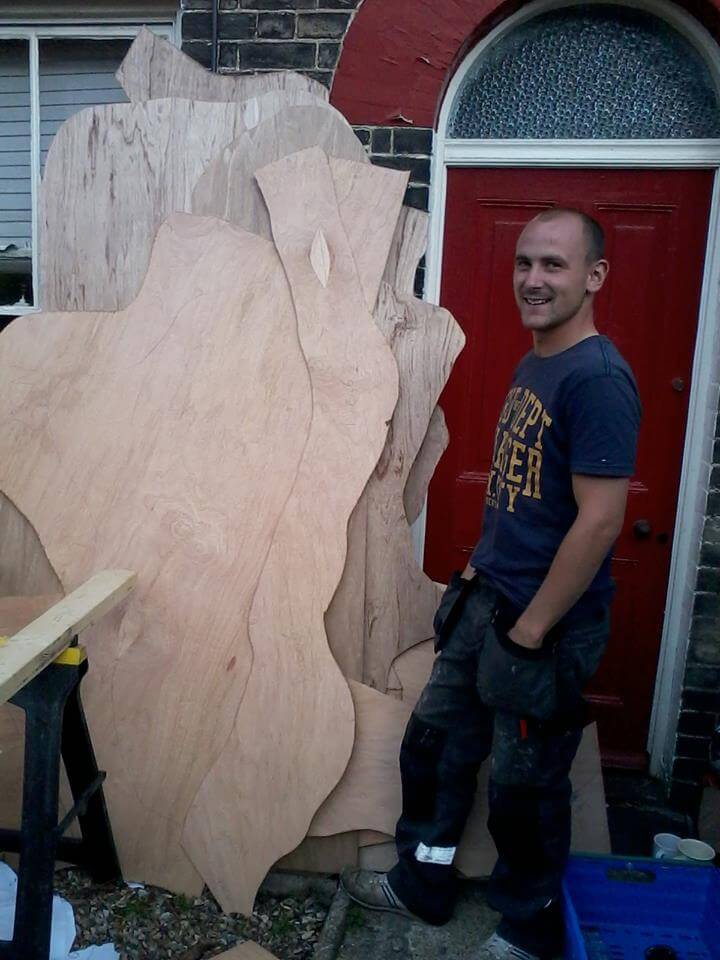 We then took them on to campus (on a wet and windy day) and started building it! 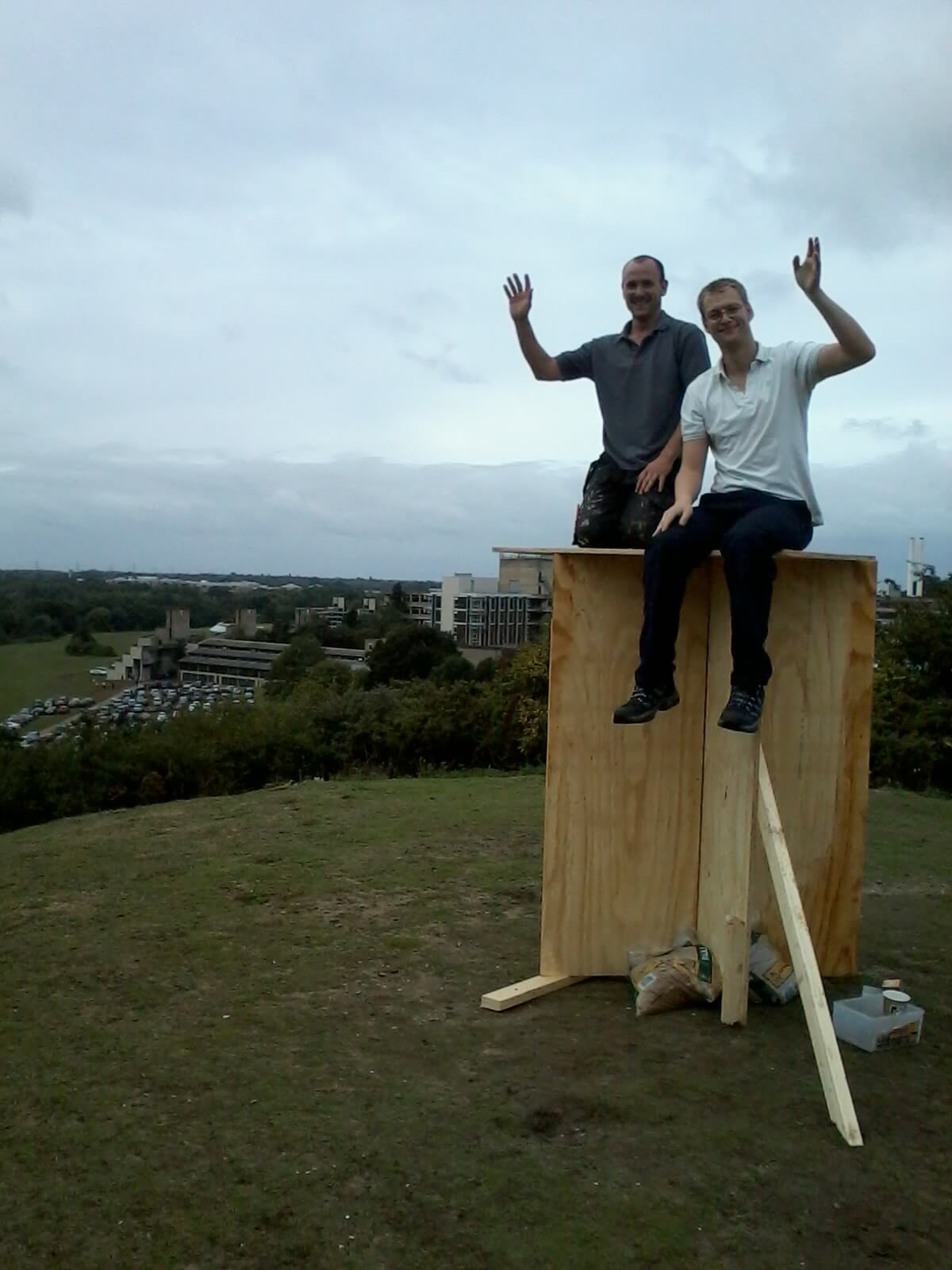 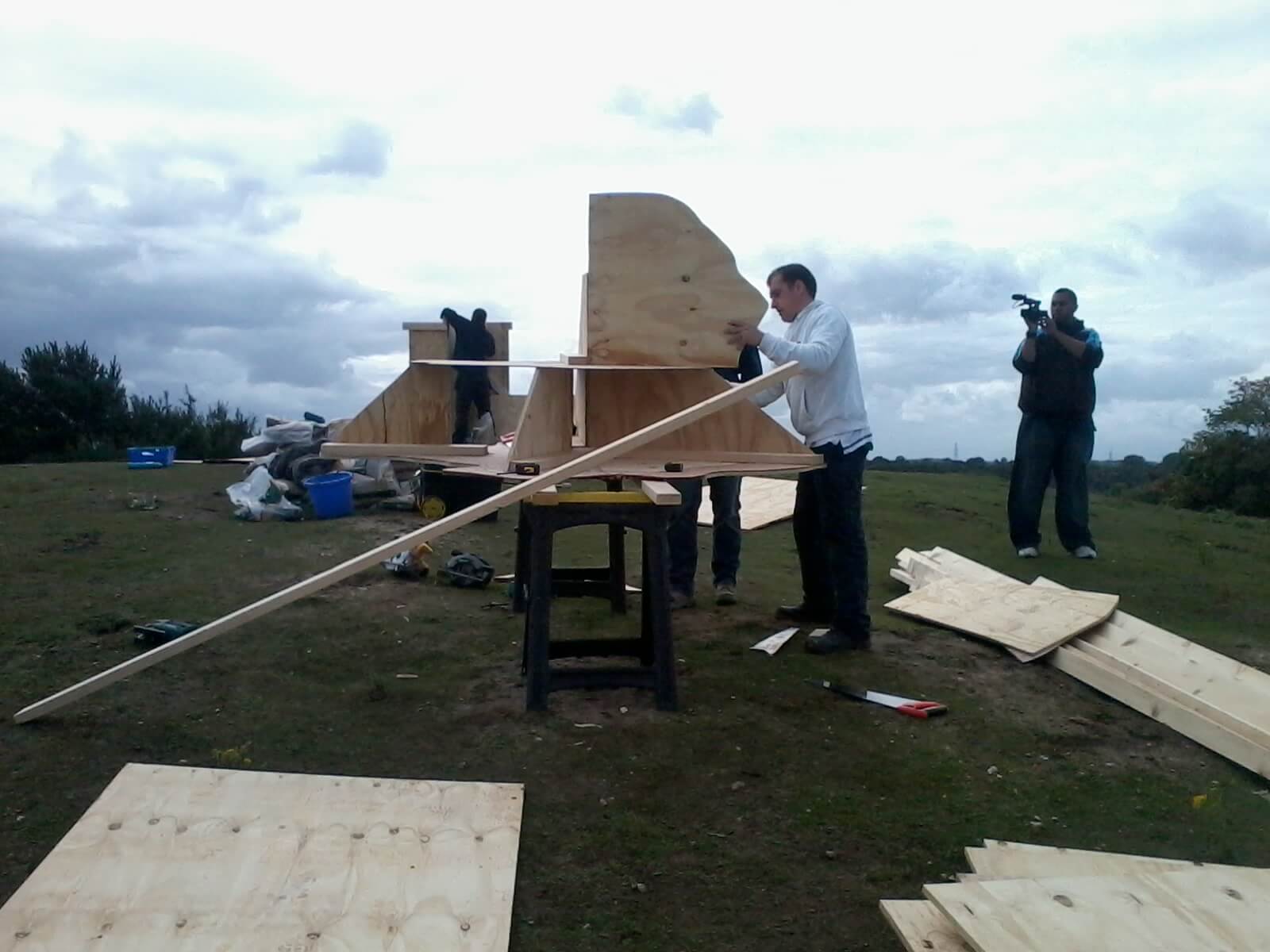 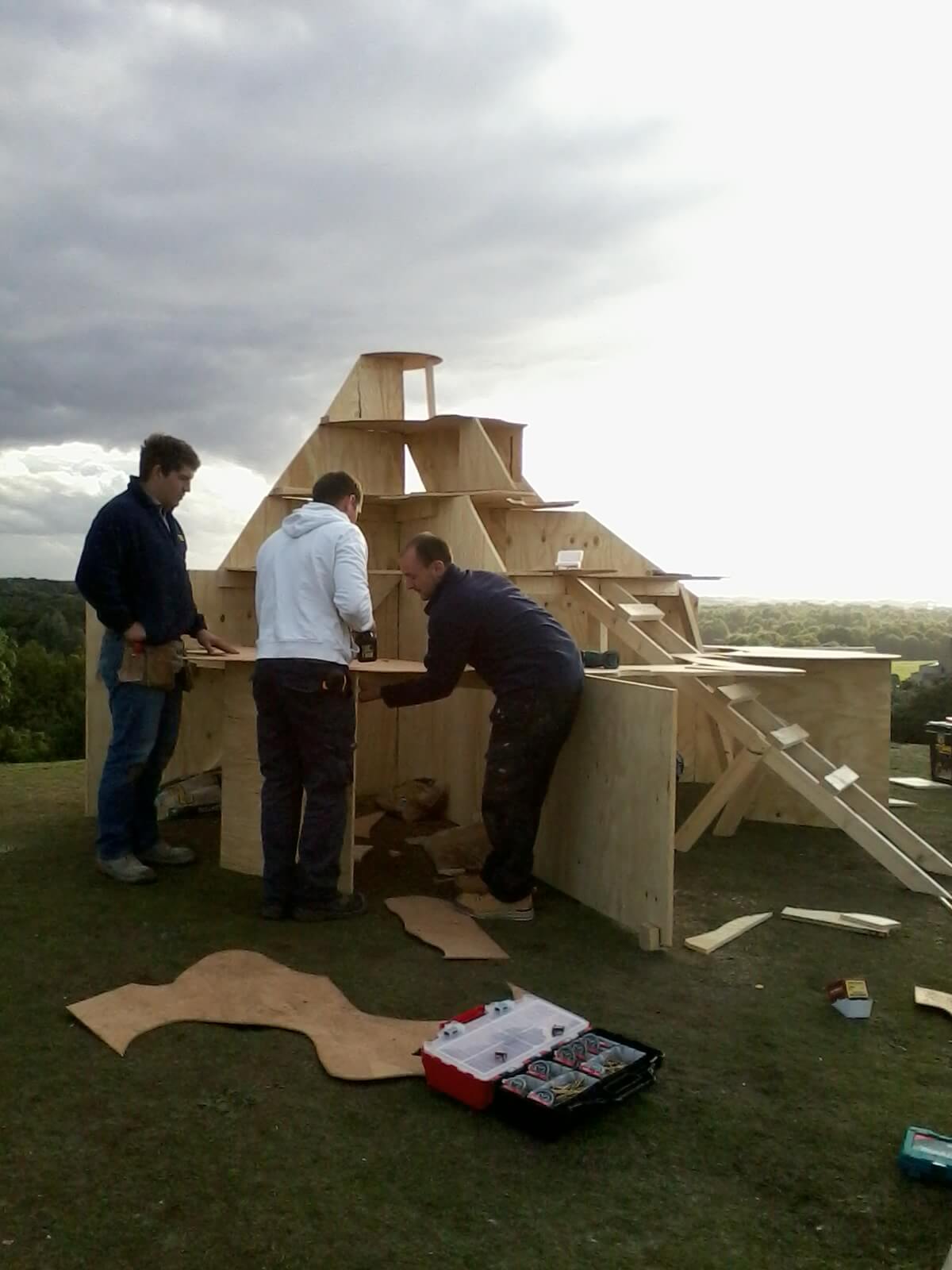 We put some “clothes” on it

By that I mean that we covered the skeleton frame with chicken wire and then coated that with dustsheets soaked in a dyed cement mixture. 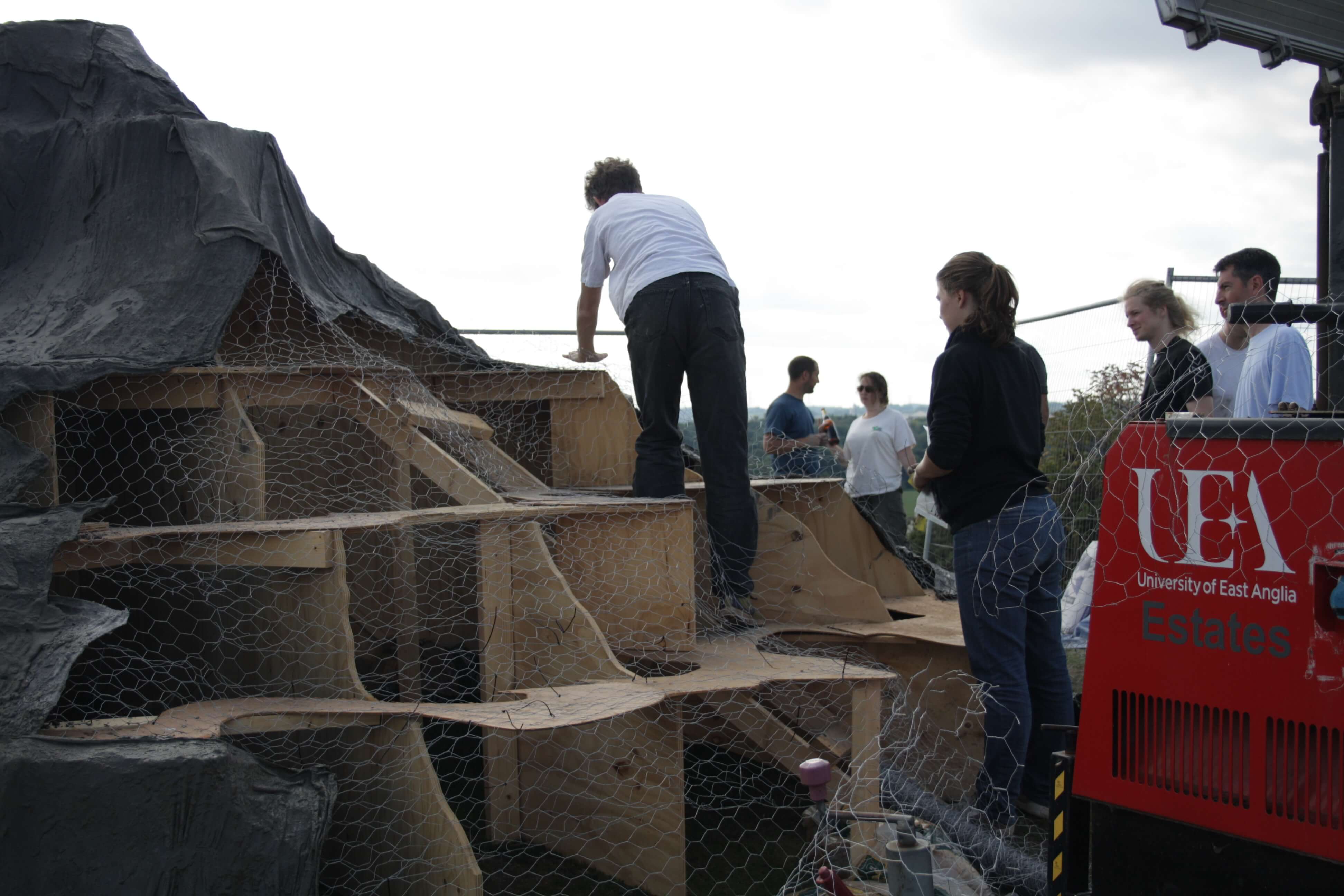 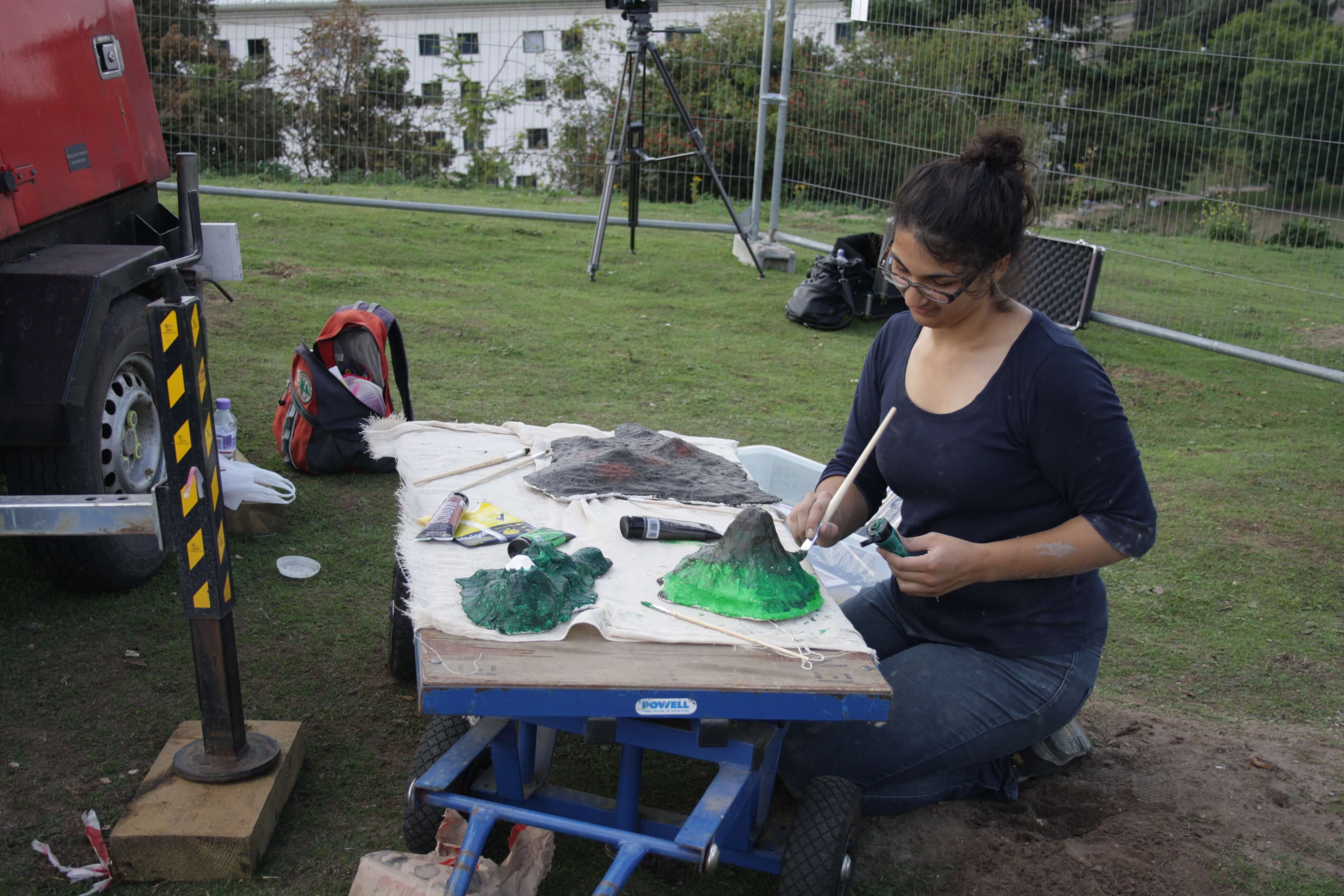 We’ve still got a few finishing touches to add, but most of the hard work is done. Make sure you come on Saturday to see the eruption!