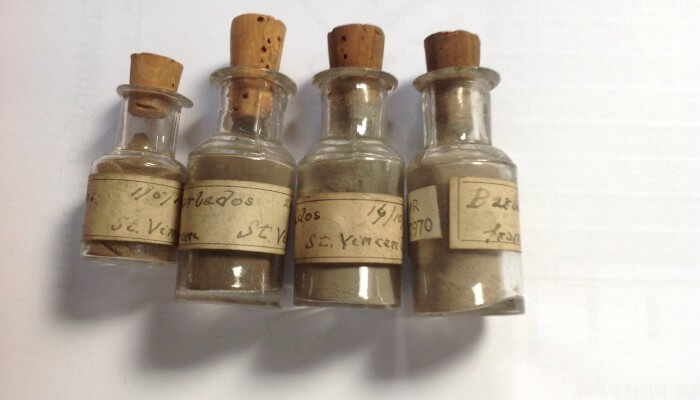 On May 1st, 1812, a remarkable weather system reached Barbados. ‘At half-past twelve AM a heavy dark cloud obscured the heavens completely. [..]  at half past one a sandy grit began to fall in small quantities‘. Through the night there was the sound of explosions and thunder, and by late afternoon, Barbados had been blanketed in several centimetres depth of ash. The origin of the ‘May dust’, as it came to be known, was soon found to be due to a violent eruption of the Soufriere volcano, on the nearby island of St Vincent.

The German explorer and botanist Robert Schomburgk later realised that this ‘rain of ashes’ showed that there must be winds in the upper reaches of the atmosphere in the Caribbean that blow in the opposite direction to the Trade Winds, near the surface. When he was living in Barbados, in 1846, Schomburgk could still find patches of the May dust across the island, which he collected and shared with Christian Ehrenberg – a scientist who had recently discovered traces of aquatic organisms in wind-blown Atlantic dusts. Later work on archived samples of this May dust showed that they were rich in bacteria and fungal spores, perhaps carried in place by high-level winds. Barbados, it turns out, is no stranger to dust. Mostly, this is carried in from Africa, and is usually only detected by careful air-sampling using carefully cleaned filters.  But, as we saw in 1812; and then again in 1902, 1903 and 1979, everytime there is an explosive eruption of the Soufriere of St Vincent, Barbados is coated in another layer of mineral dust and volcanic glass.

Two hundred years on, and we are still learning how the interaction of the atmospheric winds with the topography of the planetary surface controls where ash is carried, and then dropped, from erupting volcanic plumes. In a new paper, we use sensitive models of the wind-field, that account for the reversal of wind directions and the fine-scale topography of the islands of St Vincent and Barbados, to simulate ash fallout after the 1902 and 1979 eruptions. The computer simulations show how these two factors influence the distribution of ash after an eruption, but also that we can reproduce the observations made on the ground in 1902, and 1979. This approach means that we now have a way to improve forecasts of where volcanic ash will go, and when and how much will land on the ground during an eruption. Given how sensitive human lifelines – transport, water, food and power supplies – are to disruption by volcanic ash, this could be an important step forwards.

Darwin, C (1846) An account of the fine dust which often falls on vessels in the Atlantic Ocean, Quarterly Journal of the Geological Society, London, 2, 26-30.

This work was inspired by the STREVA project, funded by the UK Natural Environment Research Council (NERC), and is the product of a collaboration between scientists based in the UK, Caribbean, Japan and Singapore.